Nadine can talk a blue streak, and one day she tells a real whopper: she isn’t afraid of anything- no siree! Then her friends call her bluff, and Nadine must enter… The Deep. Dark. Woods. Only the woods aren’t so scary after all, until the sun sets, that is, and Nadine can’t find her friends. What is this boastful bovine to do? Run around in blind terror? Plummet off a cliff? Crash into a stream? Check, check, and check. But is all lost? Doubtful. After all, she is cow, hear her MOOOOOOOOO!

“A delightful, jaunty romp … both lyrical and funny.” – Bureau of the Center for Children’s Books (Starred review) 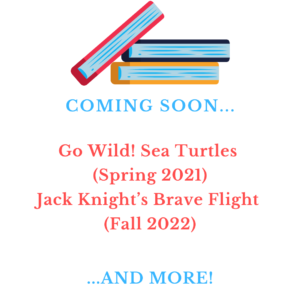